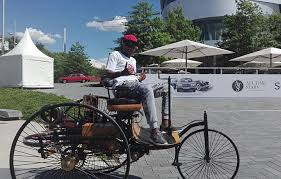 Carl Benz developed the first automobile 130 years ago, and Nick Thabiso Mmopele from Botswana is proud to drive the world’s oldest car. During the conversation between him and Voice Entertainment, one would see the excitement he had as he narrated his experience.

Mmopele who is 28 years old is recognized as the first Motswana to test-drive a Benz Patent Motorcar. He is also the director of Senepe BW, a local photography and videography company. Based on the facts from Daimler website, the car is consists of a double stroke unit and single cylinder, and the success is attributed to Carl Benz’s wife who drove the car for 100km to show her parents. The car had three wheels making it more of a bicycle but with an engine. Its steering wheel resembles a shaft that is placed between the driver’s legs, and it lacks gears.

According to Mmopele who received an invitation by Mercedez-Benz museum in Stuggart, Germany, he had to spin the steering hard enough while turning the knob for the car to ignite and begin moving. The museum’s management awarded him a driver’s license for having the classic vehicle. He regards this as an honor as he’s among 20 people globally who own such a license. Stuggart is known for being the international headquarters of Daimler AG and the home of Mercedez-Benz. All historical records of the Mercedez-Benz brand are found in this museum.

From Mmopele’s experience of driving the oldest car, he said that he had to keep steering it and pushing a lever up and down as this is what acts as its accelerator and brake. From history records, Carl Benz applied for a patent for this vehicle on January 29, 1886. A gas engine powers the car.

Mmopele expressed his sincere gratitude to the Vlog who gave him an opportunity to register as the first Motswana in the Mercedez-Benz museum books. He expects visitors from all walks of the world before the end of 2017.